It’s hard to believe it’s been less than a year since we’ve launched Parity.org. Since last September, we’ve seen nearly 250 organizations sign the ParityPledge, vowing to interview at least one female candidate for every leadership role VP and higher. These organizations span industries – healthcare, technology, retail, education and more. It’s exciting to reflect on the progress we’ve made in such a short time.

Most recently, Nasdaq, one of the world’s largest stock exchanges and a leading provider of trading, clearing, exchange technology to more than 90 marketplaces globally, signed the pledge and became a founding member of Parity.org. Last week, the Parity.org Board traveled to New York to meet with Nasdaq’s chief human resources officer, Bryan Smith, and its global head of diversity and inclusion, Supriya Jha. Bryan and Supriya are passionate about reaching gender parity in corporate America and shared some of the projects they are working on at Nasdaq with us.

Bryan and I had the opportunity to share our zeal for gender parity with the Nasdaq community through a Facebook Live interview. During our conversation, Bryan asked about what motivated me to start Parity.org, and the impact we hope to see in workplaces as a result of the work we’re doing.

I was inspired hearing Bryan share more about the progress the company has made in hiring a more diverse group of candidates since his joining Nasdaq about five years ago.

“As we look at a lot of the senior searches we’ve done [at Nasdaq] over the years, we realized we are already doing what the ParityPledge sets out to accomplish,” Bryan shared. “We want to set the tone, join the group of founding members, and get the message across that gender parity is something we should be more conscious of and hold ourselves to the commitment.”

Certainly, taking the pledge is not the endpoint in the quest to reach gender parity in business. Rather, it’s the beginning of the journey. By bringing more women into leadership roles, we have an opportunity to show those at earlier stages in their career that it’s possible to reach top levels of leadership. And, by creating diverse teams, we encourage creativity and innovation.

We’re grateful that Nasdaq has made this public commitment. In signing the ParityPledge, they join Adobe, Best Buy, Cisco, RR Donnelly (all companies listed on the Nasdaq!) and many more as role models for others.

You can watch my full interview with Bryan here. 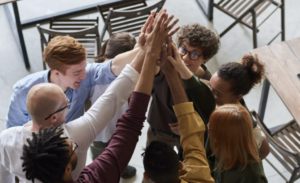